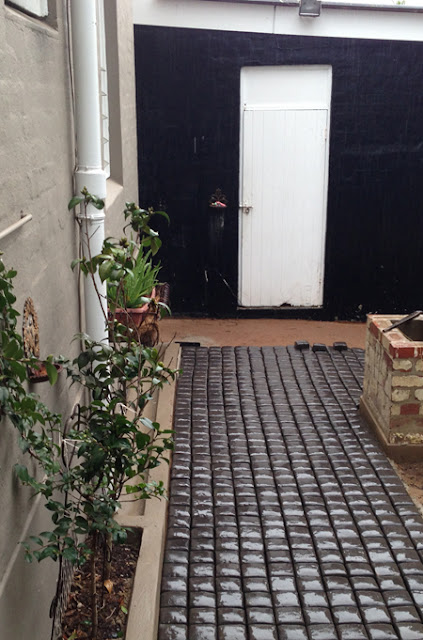 If you are in my neck of the woods you will know that it is raining in a most lovely manner today, so I had to take this shot with my phone precariously out the kitchen window. Look at the splendid cobbles that are being laid with much deliberation. Initially we had planned for a traditional stepped herringbone pattern but because the space is so narrow in parts it meant we would have had ugly halves with sharp edges. Also a cloud of h bomb like proportions rose above our back yard when just one cobble was cut, so in the interest of a dust free neighborhood we decided on the straight as you go route. Weirdly enough it suits the space and has a more contemporary urban farm feel.
They are the charcoal domed cobbles from TUSCANY PAVING which can be found at SHAPES GARDEN DECOR.
Posted by Kim Longhurst at 07:50