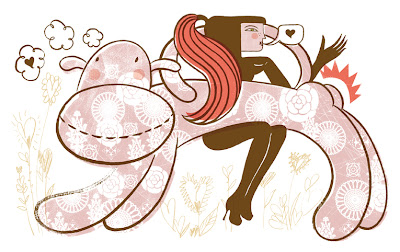 In 2007 Disturbance did an overhaul of the Sunday Tribune Magazine, local illustrators were commissioned to interpret the theme for the cover. This naughty naughty monkey was the pin-up for the Valentines issue. It originally appeared as a 2 colour print but I have fallen out of love with the pink that I used, so have played with it a little. I have been in the hysterics because I named the one scan Bum Flash, small things as they say amuse small minds! 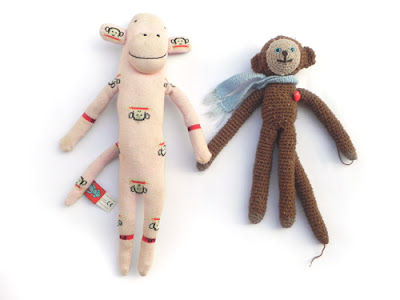 I bought the darling little knitted monkey, on the right, for Swan from an exhibition called Love & Monsters at Gallery 415 in 2008. It was designed by the very clever Caryn Tilbury, who makes amazing things: mural things, ceramic things, baked things, sewn and painted things!
My inspiration for the naughty monkey was Paul Frank's lovely creation, above on the left. In 1995 Paul Frank started making wallets out of scrap vinyl for his friends and to promote his band. He gave one as a gift to a fan of his music Ryan Heuser, their friendship developed into a very successful partnership which is Paul Frank Industries. See below other monkey love's in the range:

I am hankering after the white crochet one. Swan's one was originally the pink but he has seen some tough love. Sorry for you mr monkey.
Posted by Kim Longhurst at 11:11